Skip to content
Yeah, loving our pasta maker right about now! And since we had an extra half of a pumpkin in the fridge and a lovely bunch of sage from the lovely Jess (Thanks!!) I thought I would have a first go at making ravioli!

I based it off of this recipe, but with a couple tweeks here and there.
For the Raviolis :

Preheat oven to 175 degrees C.
Drizzle pumpkin with olive oil and rub it in to make sure all the flesh gets a good coat. Salt and pepper a little bit then put it cut side down on a baking sheet.
Bake in preheated oven until tender 45 to 60 minutes. I tend to give it a squeeze about half way through and to make sure the raw edge isn’t stuck to the sheet. I usually do things like this around lunch time if I’m home so it has a lot of time to cool down. 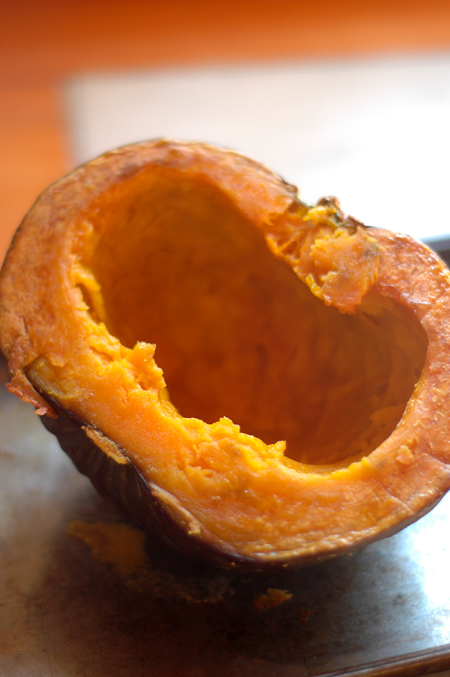 So, if it’s still cooling, make your pasta. I used a half batch, normally what the recipe calls for will make enough for 6, but if it’s just two of you, half it and you’ll have some leftovers for lunch! You can look up how to make pasta online or check the instruction that came with your machine. I won’t include the particulars here, but it’s all about timing… so once your dough for the pasta is resting in a damp tea towel..

Scoop the cooked pumpkin into a bowl, and mash until somewhat smooth. You could puree it if you want, but I always love a bit of chunk and natural textures in my food. Mix in the allspice, nutmeg, cinnamon, and Parmesan cheese until well blended. Season to taste with salt and pepper.

If you can work quickly, start to slowly boil the slightly salted water to cook the pasta.

To make the ravioli, put your pasta sheet on clean, flat surface. Since I had long sheets, I was able to make about 4 at a time by cutting strips of the dough and then placing about 1 teaspoon of the pumpkin mixture in the middle of each section. Then brush the edges of the pasta with the egg white and fold over. Make sure you give the edges a nice squeeze and pinch them together.
And as I was at this stage, my camera had an issue. So I got it a tissue and we moved on. Sorry about that 🙂

Put the raviolis into the boiling water and cook for about 3 minutes, when ready drain and put it back into the pot. In the meantime, make the sauce!
This is the easiest thing ever. Throw the butter and the chopped sage into a little skillet and cook until the sage gets crispy and the butter browns just a touch. Toss it every once in a while so it doesn’t burn.

When the sauce is ready, pour it into the pot with the ravioli and make sure it all gets a good coating. Serve up on warm plates with some veggies, and add a little extra rock salt, fresh pepper and a good grating of Parmesan cheese.