We aren’t an overly political family, but somethings can really grind our gears. So this weekend, the boys participated in their first protest march! Well, rather, they came along for it with us and got to witness democracy in action! Of course, there was a little playground action first.

If you aren’t aware of what the TPPA is, you can find out heaps more here.

The main issue that should be concerning the people of New Zealand is that the decision to join the TPPA may not be in everyone’s best interest, yet all of the negotiations are being done in secrecy. There has been almost no information about it in the media or shared with the people. 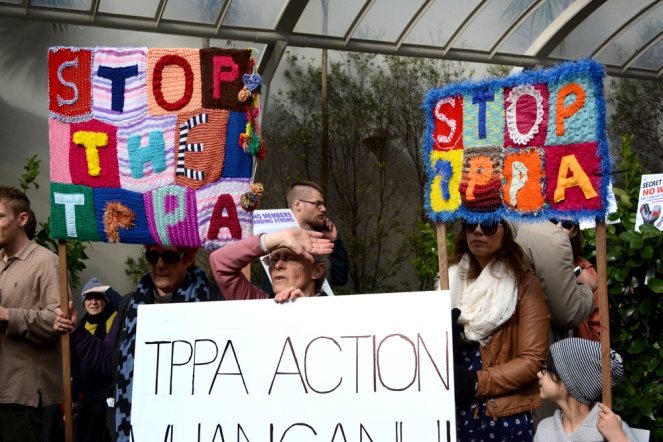 So, here is a letter to Prime Minister (from Itsourfuture.org.nz – take action)

Please copy, paste, edit, and send an email to John Key at j.key@ministers.govt.nz or john.key@national.org.nz or post to his Facebook.

I’m concerned that you are negotiating the Trans-Pacific Partnership agreement in secret, without public consultation. All I can find out about the TPPA is based on leaked documents and detective work. This is not acceptable. New Zealand is a democracy, which means that kiwis have the right to know what is done in our name and to have a say.

If the TPPA goes ahead, you will be putting at risk our innovative economy, our pristine environment, our health, and the ability to shape our own future.

The TPPA will have a huge impact on New Zealanders, and we want to have a say.

Make the negotiations public, and don’t trade away our future.
Sincerely

Hopefully, the rest of the country has a strong inkling that something is wrong here and they do what is right for the countries future!